Ask my fellow writers what’s the most important part of publishing a novel and you’ll probably hear…CONTENT! Editing! The beauty of the written word. Plot points, point of view, imagery, professional editing!

All very important—especially editing and super-anal proofreading—but in the final analysis the most important thing is…the cover.

TREASON, scream my fellow writers. Hey, nobody loves the written word more than me. I’ve made my living solely by selling writing my entire career (30 years). I write for my day job (marketing). I’ve written four novels (two published). I wrote this blog post late on a Friday after I got done with my day job writing…for fun. I’m a special kind of sick-and-twisted, freakshow writing junky.

Still, it’s the cover. Why? Because the reason you write a book is to have people beyond your friends and family read it, and that’s just not going to happen with a boring or amateurish cover. That’s like putting the world’s best tasting beer in a white can with “BEER” on it.

The cover is a book’s version of a billboard, postcard graphic design, and movie trailer rolled into one. Its one and only job is to get the reader to pick it up (or click on it) to learn more. That’s when your genius copy takes over: The description/back cover copy sets the hook and the first chapter or excerpts reels them in.

Do yourself a huge favor and decide right now to invest—as in “spend money on”—in a good cover. One of the top reasons I chose Mill City Press to publish my books was because of their killer covers. Having been through the process twice, here are some:

Take your smartphone and go to a bookstore. Just walk around and take a picture of any book in your genre that makes you want to pick it up. Get a dozen or so. You’ll need these to give your cover designer.

You can also do this by going on Amazon.com or BN.com, but I’ve found judging books by how they stand out in a display of other books is better. While you’re at it, sneak a peek at the back covers too; you’ll need ideas for back cover eventually.

2. Figure Out What Your Book Is About

I’m not talking about a 5000-word synopsis here. I’m talking the 100-word description of main elements. For my latest book, Paper Trail, the elements are: solving a murder inside a corporation, corporate surveillance (cameras in the ceiling, everything monitored) that forces people to communicate secrets via paper notes (hence the title), and the evolving romantic relationship between my main characters, Tom and Hillary. You need to get those main elements in your head so you can tell your designer.

Book cover design is a specialized area of graphic design. Check examples of past work of the cover artists or company you’re looking at. If past work makes you say “Wow,” you’re probably good to go.

4. Give Your Designer Everything You Have

Give him or her the photos of books that caught your eye. It’s also critical that you tell your designer why you like each cover. Also, communicate your main plot points, including how you came up with the book title. This is all done via a nifty online survey at Mill City Press. Tell the designer any ideas you had for the book cover, even if you suspect your idea sucks or is cliché or has been done to death.

With Paper Trail, I told my designer at Mill City Press my idea about having papers on a corporate desk with blood spatter on them. She combined that idea, with the idea of corporate secrecy and came up with three cover options that conveyed it all. It seemed like sorcery to me.

5. Take Your Time, Get Some Opinions, Make a Decision

I used Facebook to get input from my friends. Just note that you’ll get all kinds of opinions and you can’t please everyone. You’re the decider, but it’s always good to get some opinions. Once you have the chosen design, you work with your designer to fine-tune it.

So do yourself a favor: Budget for hiring someone who is good at book design or a hiring a service that includes a bunch of good designers. It’s an investment you’ll never regret. 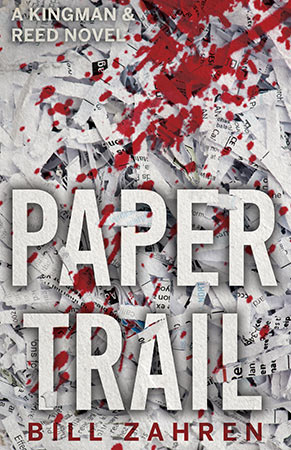 Assistant Woodbury County Attorney Hillary Reed believes God controls the world and nothing is random. Her new significant other, Sioux City Sentinel-Leader reporter Tom Kingman, isn’t so sure. After a corporate attorney is killed in her office in Omaha, Tom wonders how that is anything but senseless. He gets his chance to find out when the company’s CEO, Tom’s friend from college, makes him a proposition: come to Omaha, pose as an employee, and find the rat in the corporate cube maze.

Tom convinces Hillary to spend a week with him at his parents’ house just across the Missouri River in Council Bluffs, and they suddenly have the freedom (as well as encouragement from Tom’s parents and gregarious sister) to explore their feelings and faith. Tom Kingman always gets the story, but will he get the girl? And which—the story or the girl—is really more important to him? For now, only God knows.